What are all these in today’s time, metro trains are becoming more and more popular, metro trains are being run in every smart city, metro trains are very crazy in cities like Delhi, Bangalore, and Pune. Metro train facility has been provided to connect small towns, markets,s and travel places you can enjoy the entire city for less money with the help of this. 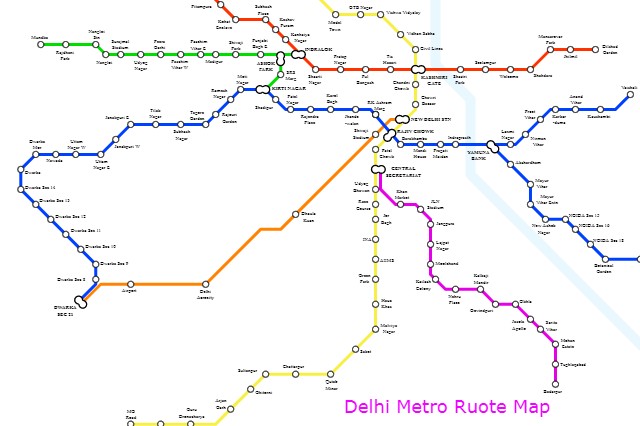 Pink Line Metro RouteMetro trains run from different route lines in Delhi, in which the pink line metro train route is much more famous because, In Delhi, the pink line helps to connect every major place in Delhi, which gives maximum comfort to the traveling traveler.

The Pink Line was the first line to be inaugurated as part of the Delhi Metro Phase III development. It is spread across a distance of about 58.5 km.

Line III in Delhi, which is known as the pink line, has been divided into two parts due to its non-completion.

These range from Shiv Vihar to Trilokpuri – Sanjay Lake and Majlis Park to Mayur Vihar Pocket 1 – a total of 39 stations.

The Delhi pink line metro route has six-coach trains running at a maximum distance of 80 km / h on 1435 mm tracks and 25 kV AC current through overhead wires. The pink line runs in a circle through the city.

There are many developed places connected to Pink Line in Delhi, which are located just a few kilometers away from the metro station.

The names of some trained places are mentioned in the following array according to the km. You can check them.

Being the Pink Line Most Popular in Delhi, the Indian Railways got its metro map, which helps the Tourist people a lot more, with the help of this map, the tourists can get very good travel inside Delhi, for even less money.

Given below is the Delhi Metro Map You will get to see a map of all types of trains pink color line Delhi Pink line shows the metro route, which can help to see the inner part of Delhi.

The U-shaped route of the Delhi Metro Pink Line route has been developed. It is better interconnected with other lines of the network in all major parts of the city whether north, south, east, or west.

It also gets some features that have not been seen in other metro lines yet. With a handicap-friendly ramp, disabled citizens can be transported directly in coaches on wheelchairs, making their journey easier. Anandpur station of Delhi Metro Pink Line will have a total of 22 token machines.

The fare of the Delhi Metro Pink route line is in line with other routes of the network according, so according to the Delhi government, the lowest fare has been stated as Rs 10, and depending on the length of the route it can go up to the north of Rs 60.

note: – This fare is before lockdown. The fare after lockdown is not fixed yet. It is estimated that the rent that was earlier will remain there, there will be no change in it.

Delhi is one of the developed cities of India, due to pollution, the local people of Delhi are in very poor condition, due to stopping the pollution, the system of ODD & Even was installed in Delhi.

During this time people helped the Delhi Metro and local express trains in their journey. Started taking and NDLS recorded the record for collecting the most passengers.

I hope you have understood the complete information related to our Delhi Pink Line metro train, if you have any kind of problem, then you can ask us through a comment.